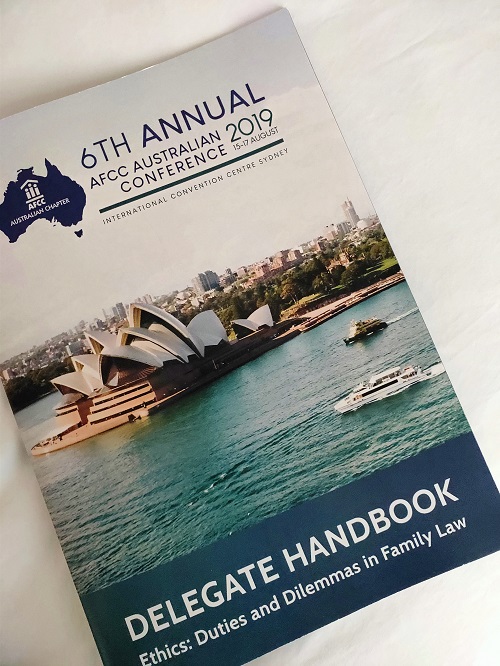 This weekend, the Association of Family and Conciliation Courts held the annual conference for their Australian Chapter.

A one-day workshop was dedicated to Parenting Coordination, as well as a panel discussion on the final day of the Conference.

Panellists included expert Parenting Coordinators from Australia, the US and South Africa, as well as the former Chief Justice of the Family Court of Australia, the Honourable Diana Bryant QC.

As someone who spent many years as a family law barrister, then a judicial officer, the former Chief Justice was able to offer a difference perspective.
She described how she was responsible for hearing Contravention Applications in what was then the Federal Magistrates Court (now the Federal Circuit Court). A Contravention Application is when a parent alleges the other has breached parenting Orders.

She described that she would ask parents if they wanted the other parent punished, or if they actually would prefer her to ‘fix’ their Orders. About 9 out of 10 times, parties chose to have their Orders fixed.

It is unfortunate that Orders or Parenting Plans often have gaps or can be ambiguous or confusing.

What if there is no location specified for changeover?
Do school holidays start on the last day or term, or the next morning?
Who looks after the children when they are sick and can’t attend school?

Why is the former Chief Justice of the Family Court a Cheerleader for Parenting Coordination?

Having someone punished for breaching an Order, doesn’t solve the underlying problem if the parents have differing understandings of what the Order means.
Importantly, the Courts can’t teach parents how to reach agreement.

As the former Chief Justice explained

“The Court gives a decision – it doesn’t resolve a dispute”.

Our Parenting Coordinators work with families to help parents and caregivers communicate better, resolve disagreements and give them to tools to do so in the future.  Ultimately this can reduce conflict, which improves outcomes for children after separation or divorce